Project Scope: Previously, a 6-story structural concrete retail shopping establishment in the heart of Downtown, Los Angeles, CA. Consisted of 60,000 square feet of buildings and structures on heavily active Los Angeles Street. AMPCO was hired for demolition and hazardous abatement of the 6-story building including the podium deck and basement. The job site was surrounded by active attached stores, high-end apartments, and the Los Angeles Police Department (LAPD).

Means and Methods: We used our hi-reach Volvo 480 excavator starting on the east side of the building moving west. We cut column to column enabling us to control the debris to protect the active businesses and the public. Dust control was a major concern for this job, so we used multiple sources such as turbines, fire hoses, and aerial lifts to protect our employees and the general public from silica dust. All foundations were removed processed and hauled off-site.

• Site was located on a major street with high pedestrian traffic due to shopping stores
• Complications occurred due to the department store having attached walls. 10,000 SF of the demising wall was hand chipped to prevent any damage to the neighbor’s adjacent building.
• Traffic control was an issue as streets are highly congested in the wholesale district of Los Angeles. 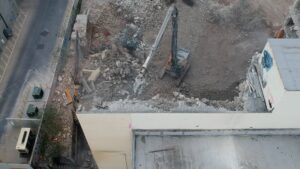 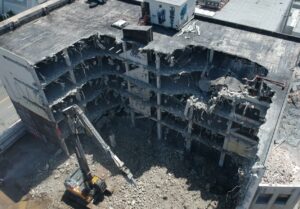